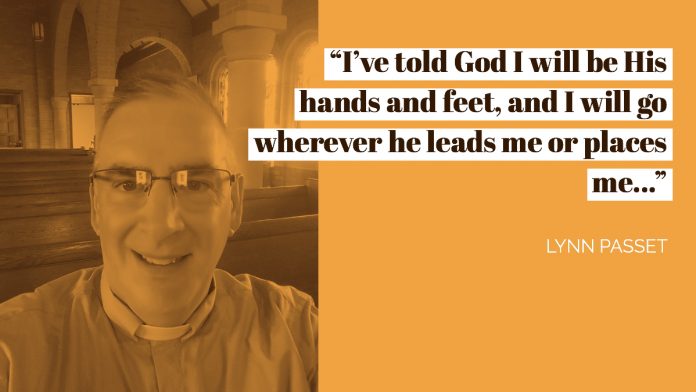 When Lynn Passet graduated from high school, he considered going to seminary, but the family farm’s pull was too strong.

“Then I started working at the local radio station and that morphed into a career in broadcasting and television,” said Passet.

Passet, who has six grown children with wife Ellen Passet, spent 15 years in radio and television. In 1998, he switched careers and ended up in sales. He is currently working at Nesco Resource as a business development manager.

Although no longer in broadcasting, when Passet moved to Findlay and got the opportunity to handle play-by-play for high school football games at WOSN, he couldn’t pass it up.

“It was enough to feed my broadcasting juices,” said Passet, “but after three seasons in the booth, I decided it was officially time to step away and retire from that part of my life.”

During his time there, Passet saw that WOSN served a very important function in the community. “High school sports are such an important fiber to all small towns and schools,” he said. “WOSN does an amazing job of giving local school and athletes a chance to showcase their individual talents, as well as their teams to the viewing area.”

Despite two successful careers, Passet’s early pull toward seminary did not go away during the intervening years. Just this past April, he became ordained.

“Since then, I re-opened my childhood church, North Salem Church just outside Upper Sandusky, that closed two and a half years ago,” said Passet. “I opened the church to hold six summer services every other Sunday night at 6 p.m. starting in June.”

Passet said he decided to hold the services so that former members could have the chance to attend the church again.

“We sing the old hymns and have a message along with Holy Communion at each service,” he explained. “Our final service will be on Sept. 1.”

Passet, who has his wife Ellen Passet’s full support in going into pastoring, is not sure of his future plans. “I’ve told God I will be His hands and feet, and I will go wherever he leads me or places me,” he said. “I would love to have a church to pastor one day, but if that’s not in his plans then I’ll do whatever he puts in front of me.”